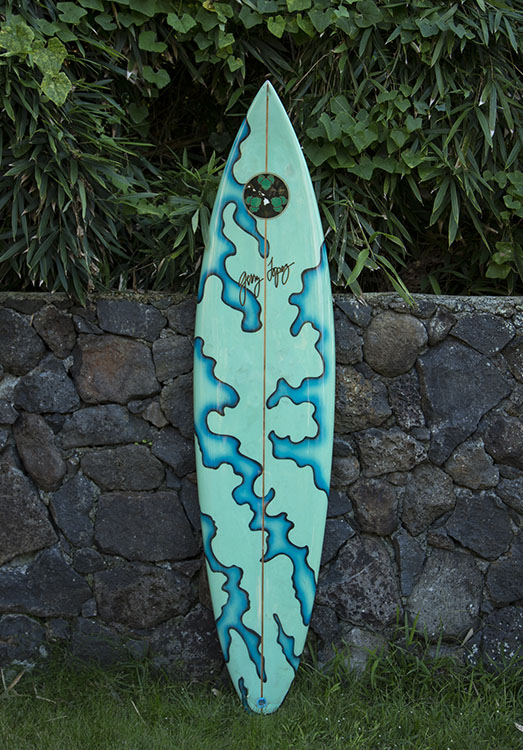 *SOLD, Request to be notified when similar board available | Board Location: Hawaii *Worldwide Shipping Available*

7’0 Gerry Lopez shaped thruster shortboard. This board was fully restored by a surfboard restoration expert with over 30 years of glassing experience.

Gerry Lopez: Hawaiian tuberiding specialist, lauded for his cool-under-fire style at Pipeline in Hawaii, and still regarded as the model of wave-riding elegance and refinement. “What he does is poetry,” fellow Pipeline ace Rory Russell once said. “For sheer beauty, no one else even comes close.”Lopez was born (1948) and raised in Honolulu, the son of a newspaperman father and a high school teacher mother; he began surfing in Waikiki at age nine, but didn’t take the sport up in earnest until high school, when he was greatly influenced by silky-smooth Hawaiian regularfooter Paul Strauch. He won the Hawaiian Junior Championships in 1966, was a three-time finalist in the state titles (1968, 1969, and 1972), and a finalist in the U.S. Championships in 1969 and 1970.

Lopez was the most-filmed surfer of his generation, and a protracted Lopez-at-Pipeline sequence was part of nearly every surf movie made between 1971 and 1978, including Morning of the Earth (1972), Five Summer Stories (1972), Going Surfin’ (1974), Super Session (1975), Tales from the Tube (1975), and In Search of Tubular Swells (1977). While the yoga-practicing Lopez had doubts about the validity of surf competition (“Surfing’s a dance,” he said, “and when you’re trying to squash your opponents it kind of takes away from that whole experience”), he nonetheless entered most of the pro events in Hawaii, winning the Pipeline Masters in 1972 and 1973, and making the finals in a handful of the meets held at Sunset Beach. He also traveled to Australia to compete during the nascent years of the world pro circuit.