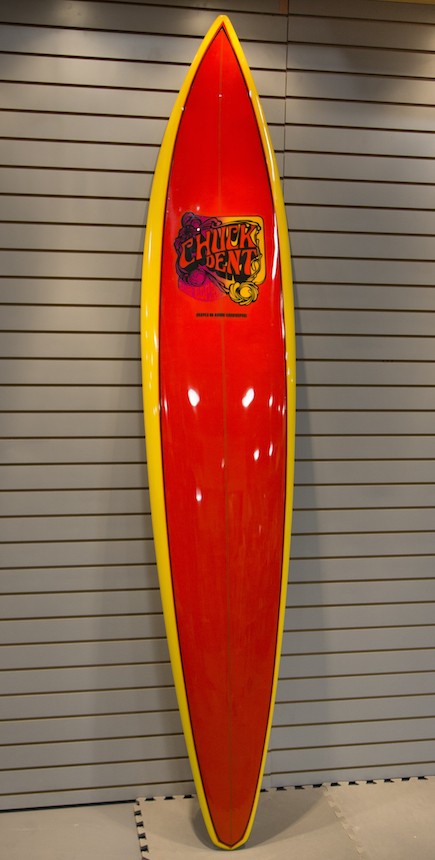 *SOLD, Request to be notified when similar board available | Board Location: Hawaii *Worldwide Shipping Available*

7’10 Chuck Dent by Barry Kanaiaupuni. This board was fully restored by a surfboard restoration expert with over 30 years of glassing experience.

Barry Kanaiaupuni: Revered power surfer from Haleiwa, Hawaii; world-ranked #9 in 1976, but best known for his innovative and never-duplicated approach at Sunset Beach. Kanaiaupuni was born (1945) and raised in Honolulu, the son of a supervisor for the Honolulu Rapid Transit bus system, and began surfing at age eight in Waikiki.

While Kanaiaupuni never went looking for the spotlight, he was featured nonetheless in virtually every surf movie of the early and mid-’70s, including Cosmic Children (1970), Morning of the Earth (1972), Five Summer Stories (1972), Going Surfin’ (1973), and Tales from the Tube (1975). A sequence of Kanaiaupuni riding Sunset to Jimi Hendrix’s “Voodoo Chile” in 1973’s Fluid Drive has been called the ultimate fusion of surfer and soundtrack.

Barry Kanaiaupuni began shaping surfboards in 1967 and, in chronological order, he worked for Rick Surfboards, Country Surfboards, Surf Line Hawaii, and Lightning Bolt, before opening BK Ocean Sports in Haleiwa in 1979. Ten years later he opened a second BK retail outlet, in nearby Waianae, and in 1996 he opened Quiksilver Boardrider’s Club, also in Haleiwa. He shaped boards for many of the best surfers in the ’70s, including Ian Cairns and Shaun Tomson; he later made boards for Rusty Keaulana, his son-in-law and three-time longboard world champion.