SOLD, Request to be notified when similar board available | Hawaii | Worldwide Shipping | Comment below or call 1-800-210-6714

Gerry Lopez Lightning Bolt 7’6 single fin surfboard shaped in the mid 1970’s. Featuring a diamond tail shape with gorgeous ruby red single fin. Owned by an old friend of Gerry’s who recalls playing paintball on Sundays in the 70’s with Lopez, Laird Hamilton, and others in the jungles of Hawaii. All original condition. Upon request we can arrange to have the dings shown in photos professionally fixed.

Established in Hawaii in the summer of 1971, Lightning Bolt was created by Gerry Lopez and Jack Shipley. Their surfboards immediately turned into the surfing name of the 1970s. The Lightning Bolt was one of the initial big-hitter surf companies. Surfers in the early 1970s knew they were picking up a quality product and would come to Hawaii from all around the world to get their hands on Lightning Bolt boards and surf-wear. Though Lightning Bolt fell off the radar after its prime days, it has lived on and flourished in Europe for the past 20 years and is making a comeback in the U.S. market. The current president of the company is Jon Paskowitz.
With Gerry Lopez riding the Bolt boards (he was at the cusp of becoming the universally acknowledged Pipeline master) and Jack Shipley’s existing business prowess, their influence combined got the best surfers in the water on Lightning Bolt surfboards. The whole surfing world concentrated on the North Shore of Oahu, and it was a revolutionary moment for the surf industry. Surfers from all over the world poured into the Hawaiian Islands, and the “it” board was the Lightning Bolt. An old school classic film from 1970 “Free Ride” featuring Gerry Lopez, Rory Russell, Rabbit Bartholomew and Mark Richards, riding Lightning Bolt surfboards introduced us to the surfing legends of our time. With the support of surf-wear executive Duke Boyd, the company turned into an industry force. There are some interesting rumors regarding the genesis of the lightning bolt symbol. Some suggest the bolt was a graphic metaphor for a heavy strain of marijuana circulating the Hawaiian Islands in the late 60s. Company co-founder Gerry Lopez denies that all: “It was about the energy.”- the spirit of Hawaiian surf, but also the energy of human physicality and finesse to make surfboards to ride that energy deeper, faster and more radically. Beautiful, skillfully crafted Hawaiian guns were at the base of Lightning Bolt. This was quite a new era in surfing that was developing fast and powerfully. In freestyle surfing and in tournaments – like the Pipeline Masters contest – surfers and surfboards were evolving incredibly fast.
The vision of the company stays the same from the very beginning. It is to provide high-quality products- the best one a man can make, something the owners would use themselves. The current president claims that he wishes the Aloha spirit of the older Bolt “to be seen and felt” in the new models. Lighting Bolt was one of the biggest companies in the industry in the 80s. It’s hard to compare it to any companies nowadays- “it was an umbrella that encompassed the entire surfing world”. Companies like this bring surfers to their roots, making them feel part of something vaster. Thanks to Lightning Bolt boards, they can still feel like one of the biggest surfers in history.
About 40 years after its establishment, the company is making a comeback reintroducing itself in the United States and internationally. Lightning Bolt at its essence represents an ideology that surfing, in its purest form, is a way of life rather than just another sport. The brand celebrates the passion of the people and how surfing is one of the simplest ways individuals can connect to nature. The company prides itself on producing a premium product for the conscious surfer that maintains quality, style, and utility as well as caring about local manufacturing. The brand emphasizes a clear global presence and rank in culture and is graced for continued prosperity. 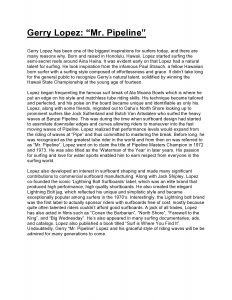